Article – Geruwa: A River that breathes

The Geruwa river springs from the misty heights of the snow-capped Tibetan Himalayas, flows down through the mountain passes of Nepal where it is known as the ‘Karnali’ and eventually joins the mighty Ghaghara on the plains of India. The best place to experience the Geruwa river in all its glory is the Katarniaghat Wildlife Sanctuary, situated in the Bahraich district of Uttar Pradesh. Here the river flows deep and fast, engulfed on both sides by the thick tiger forests of Terai. While taking a boat ride here, one can come across many natural wonders.

The first of these is the ‘maila nala’, a tributary that joins the Geruwa at Katarniaghat. As the boat leaves the fast flowing river and enters the narrow maila nala, one is treated to a picture postcard view of bluish green water surrounded by thick bamboo forests on both sides. A signboard aptly reads – “The Amazon trail of UP”. With tree roots and branches jutting out into the water, kingfishers darting in and the occasional Croc on the sandbank, it feels closer to the mangrove forests of the Sundarbans. 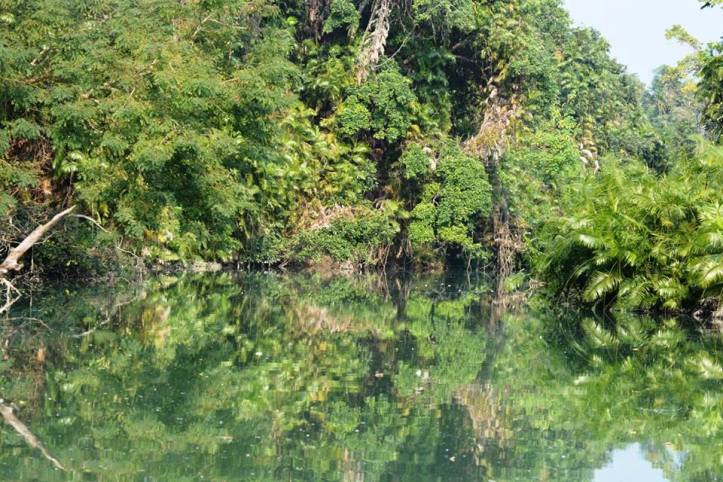 Another natural wonder is spotting the gharials basking in the sun on river sandbars. The male gharial can easily be identified by the bulbous pod or “ghara” on its long snout. Sharing its habitat with the gharial is the Indian marsh crocodile or mugger. Often sighted together, these two species are not known to fight each other. While the mugger doesn’t shy away from snacking on the occasional wild animal or even humans, the gharial exclusively eats fish by trapping them in its rows of serrated teeth. The mugger can move far inland in search of food, but the gharial cannot walk on its haunches, and never leaves the water’s edge. That is why clean water and presence of healthy fish population is essential for its survival. 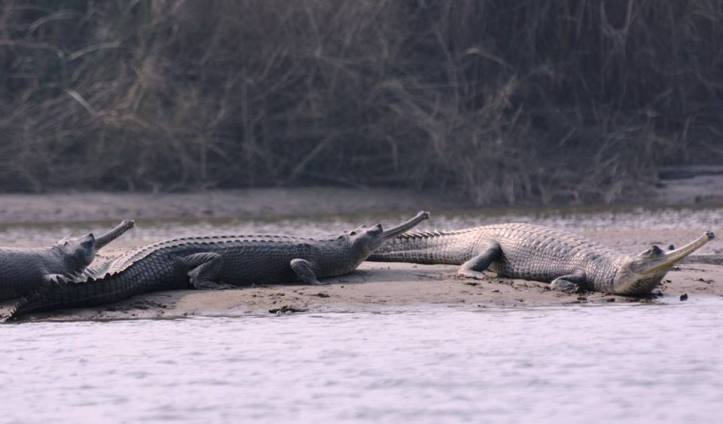 The gharial is critically endangered with only a few remaining wild populations known to exist. Yet even these would have disappeared had it not been for a sustained captive breeding programme started in the 80’s at Kukrail in Lucknow. To this day the captive gharials are bred in enclosures and released in the wild, but to ensure a bright future it is essential to protect river sandbars from erosion and the wild gharial nesting sites from being raided by locals for eggs.

Moving from the banks to the center of the river, sharp roving eyes can spot the gangetic dolphin. The dolphin hunts at the river bottom by stirring up the riverbed with its fin, but being a mammal, it breaks the water surface every 100 seconds or so to breathe. This visual spectacle happens so fast it is almost impossible to capture in still photographs, one can only store the brief glimpse with the naked eye as a memory for life. Nearly blind, the dolphin uses echolocation to hunt for fish, but sadly it cannot account for fish nets and often gets trapped. Casualties from fishing nets and isolation of populations due to construction of barrages has decimated the once widespread gangetic dolphin population across India. Luckily, it is still sighted frequently in the Geruwa’s deep pools and fast flowing river bends.

Geruwa also supports 350 varieties of waterfowl, both resident and migratory. The most interesting of these are the Cormorants. These large and handsome birds with black body and yellow beak dive into the water for minutes at a time, and can be later spotted perched on branches spreading out their wings like a fan to dry in the sun. The wooly necked storks and black ibis are often seen sharing the river sandbars with the gharials. The migratory birds to look out for are the red crested pochard, ruddy shelduck and khachaincha that arrive during winter months.

The lucky tourist might chance upon families of river otters with their heads bobbing in the shallows. You can also catch sunlight glinting off the shells of large freshwater turtles. However, the lifeline of this river is its incredible density of fish population of rohu, mahseer, taingan etc that manifests itself with ripples and splashes everywhere, making it almost seem like a river that breathes.

The adventure is still not over, on the drive back through the thick jungles and grasslands of the Katarniaghat Sanctuary, one can come across the royal bengal tiger, leopard, spotted deer, wild boar, and long-billed vulture etc. The most popular tagline associated with Geruwa reads -“Where the rare is common”, indeed it is one of the best places in India to see our riverine ecosystems and marine wildlife species many of whom are even more endangered than the tiger.

So, have you taken your boat ride on the Geruwa yet??

Copyrights of all images with Shikhar Ranjan. Year: 2017